The Austin Police Department Region 1 property crime detectives are seeking the public’s assistance in gathering video of or information about a suspect involved in a criminal mischief case.

The victim reversed the vehicle to move out of the flow of traffic and got out of his car. At that point, the suspect began to fight with the victim. The victim pinned down the suspect until he agreed to calm down. When he let him up to go back to his car to call 911, the suspect picked up an electric scooter and threw it through his back windshield before fleeing eastbound on 7th.

Police responded and searched the area, but were unable to locate the suspect. The suspect, pictured below, is described as:

Anyone with video of this incident or information about the suspect is asked to call 512-974-5320. You can also submit tips by downloading APD’s mobile app, Austin PD, for free on iPhone and Android. 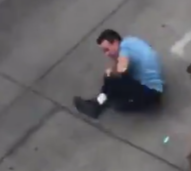